Data Driven Forms is a React library that renders a form and manages its state. Main features of this approach are:

To start implementing a form in Data Driven Forms, you need to provide four props:

All you need is to install the form renderer and then to choose components you want to use. You can use one of provided mappers to start building forms right away (or integrate your own components). The integration is simple - all it takes is just a single useFieldApi hook.

Then you can import FormRenderer from the @data-driven-forms/react-form-renderer. This component takes four required props: FormTemplate, schema, componentMapper and onSubmit. You can read about them here. 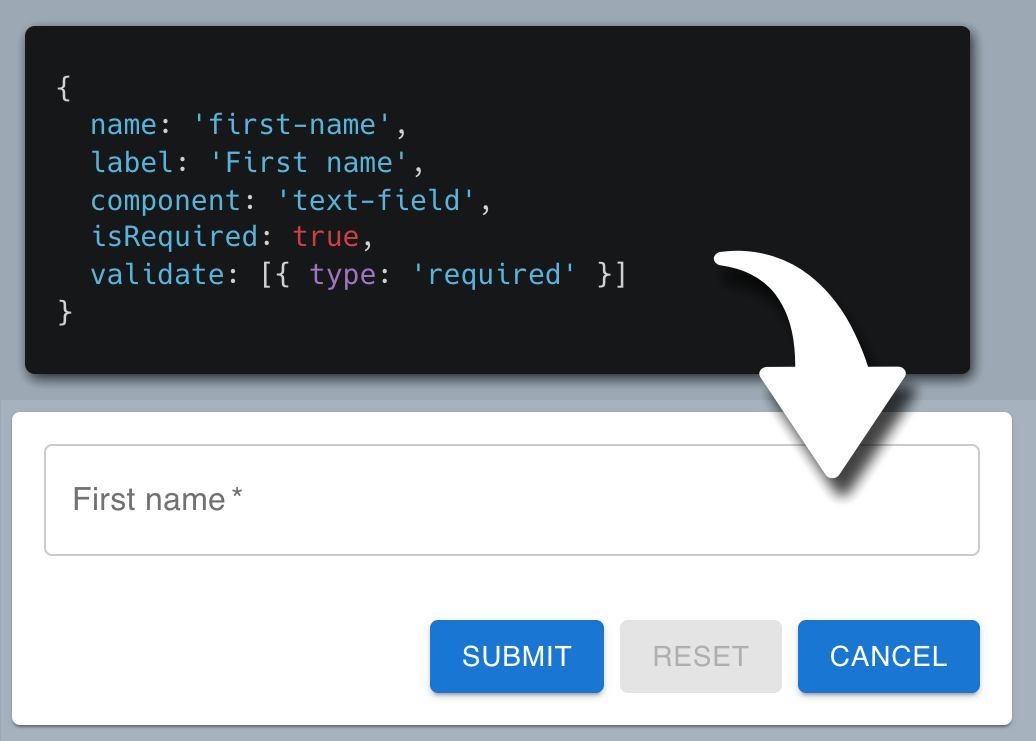 Data Driven Forms uses React Final Form for the form state management. You can check their documentations first to fully understand how the Data Driven Forms libraries work. However, it's not required to use DDF library.

Following articles can give you more insights about Data Driven Forms and why/how to use it in you projects.

This article presents basics of the data driven approach and why to choose it.

This article presents basics of the data driven form building. It is a great point to start if you are new with this library.

Comparison with other form libraries

You can find many of already existing and well-established libraries such as Formik, React Hook Form, or React Final Form. These libraries are focused on providing form state management solutions. Data Driven Forms is using one of them - React Final Form - to enhance the developer experience and to provide consistent way for building complex forms. Form state management is completely abstracted in Data Driven Forms, so developers can focus on the only thing that really matters - building the most accessible web forms.

Also, there are multiple libraries generating forms from schemas (i.e. Uniforms, AntD Form component). Mostly these libraries are using one of well-known formats such as JSON Schemas or GraphQL schemas. Data Driven Forms implements its own format to provide the most simple representation of forms - it's not being used to define data, it's directly designed to define forms so it's simple, logical and it allows to use many of form-specific features.

If users need to use generate forms from GraphQL, all that is needed is to convert the GraphQL schema to DDF one.